Saba is convinced that he is a musical genius and that the world around him is filled with spiritless people who just don’t get it.

Together with his childhood friends, Bash and Tykke, he shares the apartment that his father left him when he was a teenager, called ‘The Jungle’.

From ‘The Jungle’ Saba is struggling to make it on the music scene and get the break-through, he never got with his first album.

Bash wants to be an actor in a prejudiced film industry, and Tykke is trying to make it as an entrepreneur that will make him independent from his to chaotic friends.

They all have very little luck with their goals and it has been a slow journey the past 10 years. But when Saba’s dad shows up to his 33rd birthday, he meets the singer Sassy and ‘The Jungle´s’ status quo is shaken by this encounter. The boys go to more and more desperate measures to get Saba back on the music path and save the community they have had since they were teenagers.

‘The Jungle’ is created by Zaki Youssef.

Zaki Youssef is currently starring in the awardwinning film ‘Danmarks sønner’ (2019), and can soon be seen as the sidekick of Carls Mørck, Assad, in the upcoming Afdeling Q movie, based on the novel ‘Marco effekten’ by Jussi Adler-Olsen. 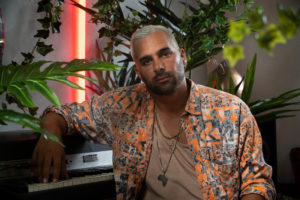