Growing up in Northern Denmark the three brothers, Mehdi, Misam and Milad, initially headed off in three very different directions.

Mehdi, the eldest, became an acclaimed prize-winning photographer with his work on countless magazine covers and platforms all over Scandinavia. Misam became a leader in the telecom industry and Milad, the younger brother, headhunted as a business strategist at one of Denmark’s leading technology investment funds.

After some years of fine-tuning their skill sets, the brothers found a way to combine their strengths in developing a strategy that will disrupt the European way of making films. Thus, they founded Rocket Road Pictures; a business-first film company, that will produce high quality content with low-budget production methods.

The three brothers made their debut in 2017 with the film ‘While We Live’, a drama made on a limited budget that was seen by high numbers and received a string of nominations at Denmark’s two most distinguished prize events, the Bodil and Robert Awards. In January, trade magazine Variety named the Avaz trio among their ’10 Europeans to Watch’, an annual event celebrating new talents.

Mehdi Avaz, Misam Avaz, and Milad Avaz will be doing a Q&A and show an exclusive preview of their new series ‘Grow’. 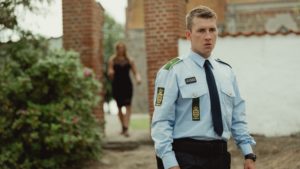